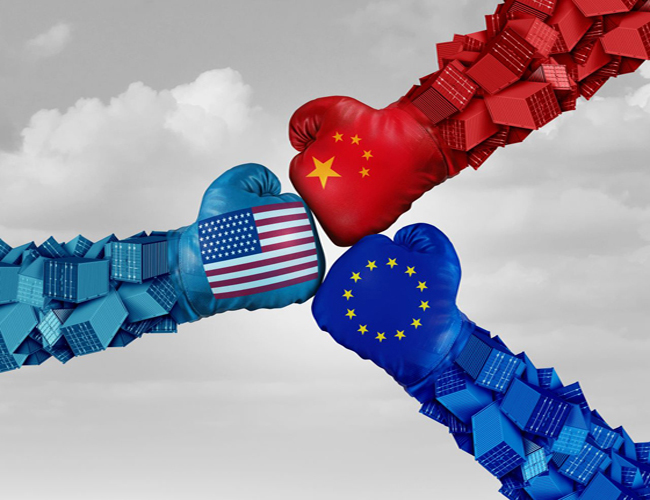 US and China cool trade war with 'Phase one' deal

The United States and China cooled their trade war on Friday, announcing a "Phase one" agreement that reduces some US tariffs in exchange for what US officials said would be a big jump in Chinese purchases of American farm products and other goods.
Beijing has agreed to import at least $200 billion in additional US goods and services over the next two years on top of the amount it purchased in 2017, the top US trade negotiator said Friday.
If the purchases are made, they would represent a huge jump in US exports to China. China bought $130 billion in US goods in 2017, before the trade war began, and $56 billion in services, US Bureau of Economic Analysis data show.
In return, the United States would suspend tariffs on Chinese goods due to go into effect on Sunday and reduce others, US officials said. The 86-page agreement is due to be signed the first week of January in Washington by principal negotiators.
"We have agreed to a very large Phase One Deal with China," US President Donald Trump tweeted Friday morning. Officials in China have "agreed to many structural changes and massive purchases of Agricultural Product, Energy, and Manufactured Goods, plus much more," he said.
Trump later told reporters at the White House that he thought China would hit $50 billion in agricultural purchases, repeating a promise he made to US farmers in October.
At a news conference in Beijing, Chinese officials said the two sides had agreed on the text of a deal, but offered no specific details on the amount of US goods China had agreed to buy.
US markets have gyrated on rumors and leaks about the trade deal in recent months, but were muted on Friday on news it had been agreed.
The agreement was announced as the US House Judiciary Committee voted to charge Trump with abuse of power and obstruction during an impeachment inquiry. It also followed closely on the heels of a deal with the US Congress paving the way for passage of a new North American trade agreement.
China AG buys
Beijing has committed to buying $32 billion more in farm products over the next two years, or about $16 billion a year, US Trade Representative Robert Lighthizer told reporters at the White House, on top of a baseline of $24 billion in Chinese purchases in 2017. In addition, Beijing said it would make a big effort to spend an additional $5 billion a year.
"To me it's an enormously important first step in our relationship," Lighthizer said. "This is China taking real commitments to do real things in a reasonable period of time, that's enforceable."
He said China would be free to buy things when "it's the perfect time in the market to buy things."
China will import more US wheat, corn, and rice, China's vice agricultural minister said on Friday, without elaborating.
China has not been a major buyer of US corn, wheat or rice in the past - though in recent years it has been the No. 3 or 4 buyer of one particular variety of wheat, US spring wheat used
for blending. China was a top 5 buyer of US corn from 2011 to 2014 but has not been a major buyer since.
Soybeans made up half of China's agricultural purchases in 2017. Demand has since cratered because the pig herds that eat it have been reduced by African swine fever, however.
Asked about Trump's $50 billion figure, officials in Beijing said on Friday that details would be disclosed later.
Some American farmers said they were waiting for more. "Is China going to live up to their commitment?," said Burton Eller, executive director of the National Grange, an agriculture advocacy group, and a beef cattle farmer.
"Are we going to get something in black and white that says they're going to buy this much over this much time or this kind of commodity they're going to need?" he said.
Lighthizer said China also agreed to buy more U.S. manufactured goods, energy and services, but provided no details. He said the agreement included specific targets for those broad areas that would be published later, and specific targets for specific products that would remain classified.
The US has agreed to suspend tariffs on $160 billion in Chinese-made cell phones, laptop computers and other consumer goods due to go into effect on Dec. 15, Trump said on Twitter.
USTR said existing tariffs on $120 billion of other goods such as smart speakers and Bluetooth headphones would be cut to 7.5%.
A statement issued by USTR on Friday said that the United States would leave in place 25% tariffs on $250 billion worth of Chinese goods.
China has also agreed to suspend retaliatory tariffs, targeting goods ranging from corn and wheat to US made vehicles and auto parts, that were due to take effect Dec. 15.
Intellectual property
The Trump White House laid out ambitious plans to restructure the United States' relationship with China, including addressing what a 2018 USTR investigation concluded were Beijing's "unfair, unreasonable, and market-distorting practices," when it started the trade war with China.