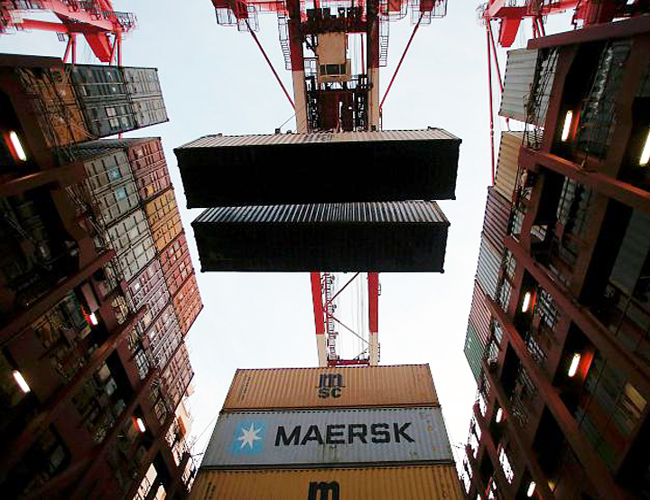 Uncertainty and trade tensions slow down the global economy

Whilst domestic factors are set to support the European economy, global uncertainties are weighing it down.
One of the latest trade deals is the agreement between the EU and Japan. It came into force on the 1st of February. The deal removes almost all customs duties - an annual total of 1 billion euros. How will it impact our daily life? Japanese restaurant owners are delighted.
“Starting with this year we got so many more ingredients with the price we pay now, we can get higher quality than before,” says Sushi bar owner Sabrina Bai.
Sabrina buys food from the Nipponia import company. Since February first, they stopped paying duty tax on most of their products.
“These agreements are very important for small and medium companies like we are. We saw a very sharp impact of these decrease of prices on our sales of Japanese products. We have an increase of import, and it is good for us,” says Bernard Journo, Purchasing Director at Nipponia.
Japan is the 6th biggest trade partner for Europe (1), and the 4th largest market for agri-food exports (2).
Tariffs on agri-food exported to Japan represented almost 40% on beef, and 15% on wine. (3) They will disappear for 97% of European products, once the deal is fully implemented. (4)
Italy is one of the main wine exporters to Japan. And Cantina Antonella Corda is a growing success.
“We started exporting to Japan one year ago,” says Antonella Corda, founder and owner. The first year we dealt in small amounts, which gradually became much more consistent, to the point that the business with Japan today represents 16% of our exports.”
EU forecasts dairy exports to expand. (5) If the Managing Director of Smartimport Marta Sanna hasn’t closed any deal yet, she is confident in the potential of this cheese.
“The Japanese market is very interesting because Japanese people are interested in quality,” she says. “And also they have the money to spend. But at the same time, the market is a little bit slow. But if you make a deal, this deal will last for a long time.
The EU expects that the agreement will add 33 billion euros to its GDP by 2035 (6), and yet, globally, multilateralism is facing many challenges.
What are those challenges and is multilateralism under threat? We spoke to Arancha González, Executive Director of the International Trade Centre in Geneva.
“I think there is a threat to multilateralism today in two different ways,” he says. “First in what multilateralism means, which is a system of international cooperation. It is talking, dialoguing, agreeing - as a means to manage our relationships. But also an attack on specific rules of international trade, that restrict unilateral pulsions, not because one feels weak, but because one thinks that if it restricts itself, it is going to be stronger and the other part is going to be stronger. But the choice today is not between multilateralism or bilateralism, that is the wrong dichotomy. Today we have to choose between order or chaos. Multilateralism means order, a system, rules, predictability, transparency. Unilateralism today means chaos in our economies. The international trading system needs fixing. There are unfair trading practices, that need to be addressed, there are rules that need to be changed, there are rules that need to be modernised, but they have to do it in a cooperative manner because otherwise, it is going to be chaos.”
What do you see as the main factors of uncertainty here in Europe?
“Well, I think the number one uncertainty is uncertainty in the global economy. At the end of the day, two-thirds of European growth comes from abroad, from outside the EU. So there is uncertainty in the global economy - it affects the European economy big time. The second uncertainty is within the European borders - Brexit. The unfinished economic and financial integration which have to be dealt with sooner rather than later, to build the resilience of the European economy. Every day that passes without an agreement on how to deal with Brexit creates more uncertainty and this uncertainty is dragging on growth in particular in the UK and we are seeing that figures are being revised downwards month after month.”
We asked you to bring a real object to illustrate global uncertainty. What is it?
“I’ve brought my crystal ball! This is how businesses and governments feel today. They feel they have to look at the crystal ball to predict what the future would look like. And I think they would rather live in the world of predictability. So let’s forget about the crystal ball and go back to building institutions and rules, that would guarantee stability, transparency and reduce uncertainty.”
So at the end of the day uncertainty and trade tensions are weighing on people, on consumers, on Europeans and global citizens.